The file transfer specification is still work in progress

The service consists of two GATT characteristics that act as a bidrectional link, similar to many BLE UART implementations. The two channels are seen from the Central perspective and hence named Central TX and Central RX.

This protocol was designed to strike a balance between ease of implementation and reasonable levels of functionality.

All communication between Central and Peripheral is packet based. The first byte specifies the packet type using a char followed by an optional CRC and/or payload, depending on the packet type.

CRC32 of the whole CHUNK packet including first byte, offset and payload.

The file transfer process can be described as a series of states from the view of the Central role: 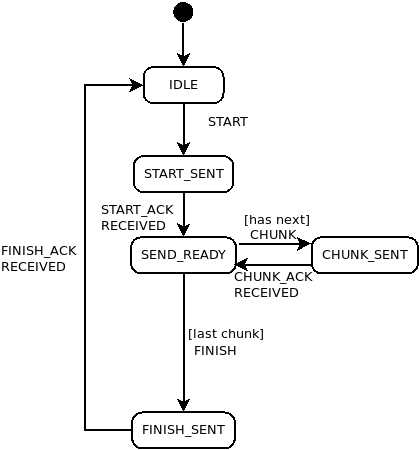 After FINISH_ACK was received, the transfer is complete and the process can return to IDLE.

As this is a custom file transfer protocol developed under less than ideal circumstances, it does not provide any guarantees, especially not regarding reliability or security. The protocol assumes a secure link and a trustworthy peer, amongst many other things. Use with caution.